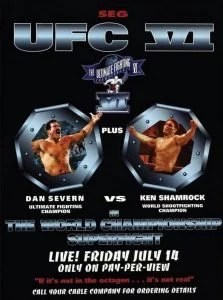 UFC 6: Clash of the Titans was the sixth mixed martial arts event held by the Ultimate Fighting Championship on July 14, 1995, at the Casper Events Center in Casper, Wyoming. The event was seen live on pay per view in the United States, and later released on home video.