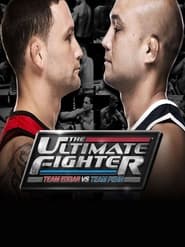 The coaches and participating weight classes were officially announced by the UFC in September 2013. Featured on this season was a mix of middleweight and light heavyweight competitors.