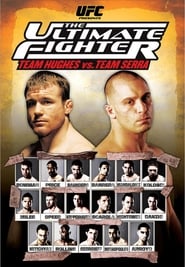 The Ultimate Fighter 6: Team Hughes vs. Team Serra is the sixth season of the Ultimate Fighting Championship produced reality television series The Ultimate Fighter, and premiered on September 19, 2007 on Spike TV, after UFC Fight Night 11. This season features only welterweight fighters. The teams are coached by former UFC welterweight champion Matt Serra and former welterweight champion Matt Hughes. The coaches were to fight for the Welterweight title after the completion of the show, on December 29 at UFC 79:Nemesis from the Mandalay Bay Events Center. however due to an injury sustained by Serra, Hughes faced top contender Georges St. Pierre on the 29th, with St. Pierre defeating Hughes by submission in the second round and going on to challenge Serra for the undisputed welterweight title at a later date. Both coaches are participating in a series of TUF for the second time. Hughes was a coach on series 2 and Serra won the welterweight division on series 4, thus earning the opportunity to face Georges St. Pierre at UFC 69. Unlike in previous seasons, the winner of a match does not determine which team picks the next match. The teams alternate picking matches in the first round, regardless of results, and the team that has the most wins picks the fights for the quarterfinals.