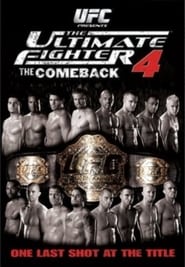 The Ultimate Fighter 4: The Comeback is the fourth season of the mixed martial arts reality television series The Ultimate Fighter. It premiered on August 17, 2006, immediately after the conclusion of UFC Fight Night 6. The finale was aired on November 11, 2006. This series featured a change from the usual Ultimate Fighter format. Instead of UFC hopefuls, the cast was composed of fighters that had fought in the UFC but had yet to win a UFC title. The winners in the middleweight and welterweight divisions earned a UFC title shot in their division and a $100,000 purse, along with a $100,000 sponsorship deal with Xyience. Instead of coaches, prominent trainers and UFC fighters acted as advisors. Randy Couture, Georges St. Pierre, Marc Laimon, the grappling instructor from seasons 1 and 2, and Mark DellaGrotte, Kenny Florian’s kickboxing trainer, were the advisors. The cast still lived in seclusion in the Las Vegas house. The rules were the same as in The Ultimate Fighter 3, where preliminary round matches were two rounds with a sudden victory round in case of a tie, and all fighters had to win a preliminary match before advancing to the semi-final round. The team that had won the last match decided the next match, with a coin toss deciding which team set the first matchup.