Two days prior to the live episode, the 32 fighters were introduced to Dana White and the two coaches. White explains that an elimination round will be held and only 16 of the fighters will move on to “The Ultimate Fighter House” to compete during the rest of the season. He further explains that the elimination fights will consist of a single five minute round. 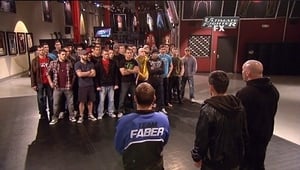