As Lesnar continued to scold his team after Charlie Rader’s loss to Ramsey Nijem, Len Bentley came back into the room, and Lesnar questioned his toughness. He said that Chris Cope (the only Team Lesnar fighter to win his bout through four prelimary fights) is the only one that has impressed him so far. Back at the house, Bentley continued to vent his frustration and showed his dislike of Lesnar. 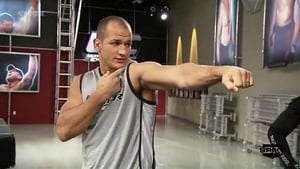